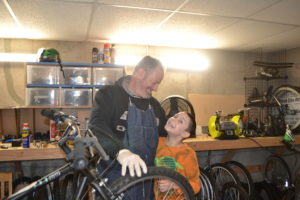 If you ask Woods resident Shawn Cain what his favorite day of the week is he will respond enthusiastically by saying “Oh, that’s easy…Wednesday!” It might seem like an unusual response for an 11-year-old boy but for Shawn, Wednesday is the day that he gets to spend time working alongside his new best buddy, Steve Smalley, a maintenance worker in Woods’ Facilities Department. Each Wednesday the duo reports to the bike repair shop on Woods’ campus at noon and work together for an hour or so to get residents’ bikes back in working order. The repairs often require them to replace bike chains and tires but Steve allows Shawn to perform many tasks during their time at the shop.

“I let him unlock the door, turn on the lights, get the tools out, and put on a tool belt and then we get to work fixing the bikes,” said Steve. “We are only a few weeks in but he can already do so many things. I keep him busy with work and he keeps me busy with questions. He really wants to learn about all of this stuff.” 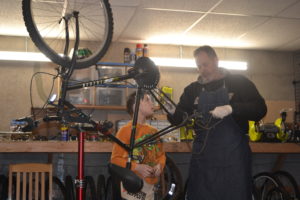 Shawn’s questions began even before the two started working together, a vision that came to fruition just a few weeks ago. The pair first met when Steve visited Gardner Education Center, the school at Woods that Shawn attends. Shawn showed interest in the work that Steve and other maintenance workers were doing and Steve certainly took notice. In November, Steve was honored at Woods’ annual employee recognition dinner for the creation of the bike repair shop, which is giving new life to dozens of residents’ bikes that are in need of TLC. A chance conversation between Steve and Woods’ CEO, Tine Hansen-Turton, led to an almost instant pairing of the two.

“I had this idea almost immediately after I started talking to Shawn. I really thought he could benefit from working with me,” Steve said. “I spoke with a few people about it but once I talked to Tine things were set up right away. I saw Shawn shortly after and he ran up to me and was so excited that we were going to get to work together.”

The quick bond that Shawn and Steve have formed is an unexpected surprise given all that the two have been through in their own lives. Shawn has experienced and overcome so many challenges 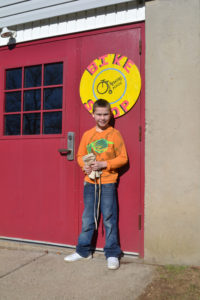 and his friendship with Steve is a great source of comfort and happiness after difficult and abruptly severed relationships over which he had no control. Steve lost his son, also named Sean, in an accident in 2010. Sean shared Steve’s love of and talent for fixings things and the two often worked on projects together, something Steve has missed the last few years.

“I really enjoy working with him and Wednesday is now also my happiest day of the week. I know this has been really good for him but it has also been great for me,” said Steve. “I feel like someone was watching over us and brought Shawn and I together.”

In an effort to improve communication, daily living skills and educational outcomes for both … END_OF_DOCUMENT_TOKEN_TO_BE_REPLACED

We are committed to eliminating barriers and creating possibilities for achievement.   We … END_OF_DOCUMENT_TOKEN_TO_BE_REPLACED

We exist to drive greater achievement for the individuals we serve.  Whether living  on our campus, … END_OF_DOCUMENT_TOKEN_TO_BE_REPLACED