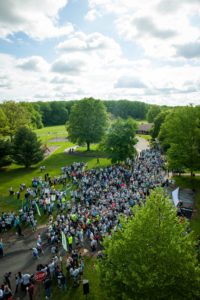 The sun broke through just in time to see more than 1,100 walkers, runners, and rollers take their mark for the third annual Run for Woods 5K and 1 Mile Fun Walk on Saturday, May 6. In just three short years, the Run for Woods has become one of the largest integrated events in Bucks County and it continues to grow thanks to the support of staff members, sponsors, community members and families of Woods.

At the Opening Ceremony, State Representatives Frank Farry and Gene DiGirolamo and State Senator Tommy Tomlinson presented Woods with a resolution from the State of Pennsylvania recognizing the importance of our advocacy efforts, which ensure that people with intellectual and developmental disabilities have a choice in where to work. 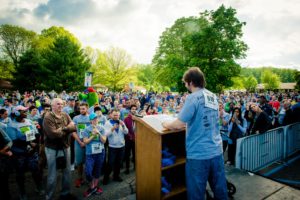 Following the run/walk, participants were treated to a delicious lunch of pork ribs and steak prepared by Outback Steakhouse and pasta and chicken prepared by Carrabba’s Italian Grill. Our local Corner Bakery Café in Newtown also hosted a wonderful dessert tent. Entertainment was provided by a group of Woods residents who presented several songs from their recent Disney Cabaret performance during lunch.
Awards were presented to the Top Individual Fundraiser: Whit Park, a Woods resident who raised more than $7300, the Top Fundraising Team, Team Mikey [Faulkner], which raised $14,425, and the Largest Team, the Woodlands Warriors, with 58 participants including residents and staff. Awards were also presented to the fastest male and female runners in 10 age categories. 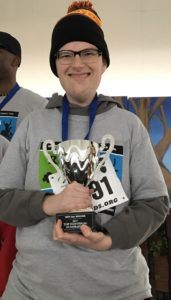 “For the first time ever, a Woods resident was our most successful fundraiser. Whit Park raised $7300 for Woods Services,” said Hilary Stephens, Vice President of Development. “Whit spent hours on the phone calling friends and family. What a self-advocate! I hope that next year, others will follow his lead.”

Whit has lived at Woods for nearly 20 years and currently works at The Woods Enterprise (TWE) work center and recently started at the Yellow Daffodil Flower and Gift Shop. He enlisted the help of his parents, Penny and Jerry, and his brother, Ross, to spread the word about the Run for Woods and even he was impressed by the amount of money he was able to raise.

“I was pretty amazed myself,” Whit said. “I thought it was a great thing to do to raise money and my goal is to beat my total next year.”
Thanks to the generosity of nine Faulkner Ciocca Dealerships that raised a whopping $90,000 for Woods this year, and a record-breaking turnout, a total of $205,000 was raised for Woods Services. Joe Faulkner and Gregg Ciocca were on hand with their families to ensure that Woods reached its goal. Funds raised at the run/walk support services not currently covered or reimbursed by any funding source (including school systems, private insurance, Medicare or Medicaid) like music and art therapy, field trips and tickets to sporting or cultural events in the community or capital improvements to our buildings and grounds. 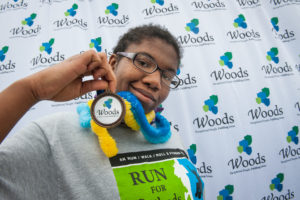 “We had a record 755 donors this year supporting our runners and walkers which is more than we have ever had. And the participation of our new community partners, Outback Steakhouse, Carrabba’s Italian Grill and the Corner Bakery Café has helped us take the Run for Woods to a whole new level.”

Thank you to everyone who helped make the third annual Run for Woods the best one yet!  We look forward to seeing everyone next year!

In an effort to improve communication, daily living skills and educational outcomes for both … END_OF_DOCUMENT_TOKEN_TO_BE_REPLACED

We are committed to eliminating barriers and creating possibilities for achievement.   We … END_OF_DOCUMENT_TOKEN_TO_BE_REPLACED

We exist to drive greater achievement for the individuals we serve.  Whether living  on our campus, … END_OF_DOCUMENT_TOKEN_TO_BE_REPLACED