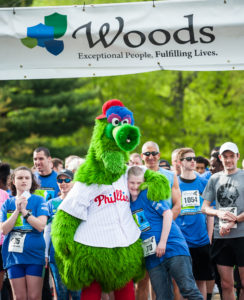 A beautiful spring day set the scene as 1,000 runners, walkers, and rollers participated in the 4th annual Run for Woods on Saturday, May 5th. Eighty volunteers served as course marshals, assisted with registration, staffed the lunch lines and presented well deserved medals to all who crossed the finish line. Congressman Brian Fitzpatrick received Woods’ Humanitarian Award at the Opening Ceremony and State Representative Frank Farry served as the official starter.

The event attracted 77 teams, including a large team from Johnson, Kendall & Johnson. Twenty JKJ employees raised $11,000 for Woods in addition to the $10,000 Gold Sponsorship provided by the insurance and risk management company.

“My favorite part of the Run experience was feeling and seeing the exuberance and energy of all of the participants and the staff, as well as knowing that my participation in the race was helping to make a difference in lives of many people who truly need our help,” said Kathy Glenn, Administrative Assistant for JKJ. 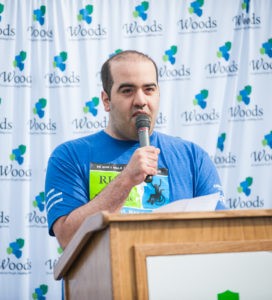 Woodlands resident Patrick Scotto, 21, welcomed the enthusiastic crowd prior to the start of the Run and shared his story. Patrick has worked for the last year in Woods’ Café, “Common Grounds” where he takes orders, prepares food, stocks shelves and works the cash register. Patrick expressed his appreciation for the Woods staff who, “have helped me recognize right from wrong and treated me with respect. It is because of my staff that I am able to treat others the way they want to be treated.”

Awards were presented to the Top Individual Fundraiser: Whit Park, a Woods resident who raised $5690, the Top Fundraising Team, Ciocca Subaru, which raised $13,685, and the Largest Team, the Woodlands Warriors, with 68 participants including residents and staff.

Following the run/walk, Outback Steakhouse and Carrabba’s Italian Grill prepared and donated a lunch of ribs, steak, pasta and chicken for a hungry crowd of 800. Drinks were donated by Pepsi and Wawa and participants dined outside together under a huge white tent. 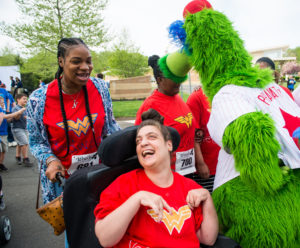 Thanks to the generosity of 10 Faulkner Ciocca Dealerships that raised a whopping $73,000 for Woods this year, and had a record-breaking turnout, more than $194,000 was raised at the Run. Funds raised at the run/walk support Woods’ Greatest Need, which this year includes the expansion of the Davenport Medical Center at Woods, which provides care for both residents and staff.

The newest dealership to participate was Ciocca Chevrolet of Princeton, which recruited nearly 30 team members for its Princeton Princes and Princesses team – all sporting tiaras!  Michael Minetti, Parts and Service Director for Ciocca, stated “We are blessed with employees who believe that we are a family and understood the importance of the Run. Our employees were excited to be a part of something that benefited people in need.” 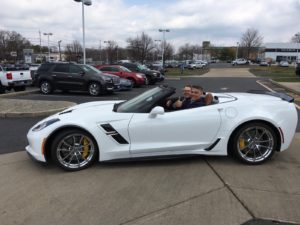 Three Woods residents were named “Ambassadors of the Run” this year: Jason Speer, Whit Park and Adam Greene, helping to get the word out about the event.  Adam, a Beechwood NeuroRehab resident, visited Ciocca Chevrolet of Princeton and shared the story of his acquired brain injury and the improved quality of life that he enjoys now as a result of the services he receives at Beechwood NeuroRehab, a program of Woods.

Adam was so inspiring that the dealership registered one dozen participants and raised $500 in just one hour! He was rewarded with a spin in a brand new convertible Corvette. Additional fun elements that were significant at the award-winning Run for Woods this year included character visits with super heroes and princesses, complimentary fruit smoothies to quench your thirst, game tables and prizes from Dave & Busters, and singing and dance performances that were enjoyed by all.

In an effort to improve communication, daily living skills and educational outcomes for both … END_OF_DOCUMENT_TOKEN_TO_BE_REPLACED

We are committed to eliminating barriers and creating possibilities for achievement.   We … END_OF_DOCUMENT_TOKEN_TO_BE_REPLACED

We exist to drive greater achievement for the individuals we serve.  Whether living  on our campus, … END_OF_DOCUMENT_TOKEN_TO_BE_REPLACED