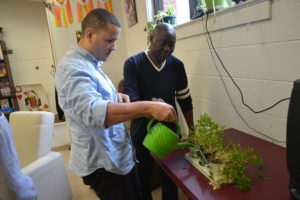 Woods resident Luis Perez and staff member Musa Kamara have spent five days a week together for the last 10 years. During that time, the pair has weathered many storms and celebrated numerous successes. But the road to the increased independence and expanded opportunities that Luis now enjoys was not always an easy one. He came to Woods more than a decade ago with limited communication and inadequate coping skills and has made extraordinary strides since his arrival.

“Since I met him 9 year ago, Luis has made consistent and significant progress in regulating his emotions which allows him to cope with a wider variety of situations,” said Woods’ Residential Program Care Coordinator Erin Caraballo. “He has also made great progress in his ability to communicate. Now, he can say a few full sentences such as ‘what are you doing?, which shows the amazing growth he has made through the years.”

When Luis first came to Woods at the age of 18, he required two or more staff members to accompany him on off-campus trips. He also required a dedicated 1:1 staff member, Musa, to be with him during his time spent at Woods’ Holland Enrichment Center, a life skills day program for individuals with intellectual and developmental disabilities who are retired or unable to work.

Luis’ Care Coordinator at Holland, Christina Santana, says the staff was so impressed with Luis’ progress over the last year that he no longer requires a dedicated staff member and now spends his days with Musa and another Woods individual. Caraballo credits Luis’ entire care team, including Musa, Santana, Holland Instructor Marieflore Chatelier, and Residential Counselor Eddie Lynch with the progress he has made since arriving at Woods.

“Things that have helped Luis’ progress include a structured day, regular physical activity (walks, playing basketball, riding a tricycle), water play, and a modification of his environment,” said Caraballo. “Through consistent 1:1 staffing, the utilization of a Behavior Support Plan and the constant support of his residential and day program staff, Luis has exhibited a noted decrease in his tracked behaviors which has made it possible to begin the process of fading his 1:1 staffing,” said Caraballo.

“Since Luis has been in a group of two, his personality has begun to truly shine. He has been smiling more and there has been a noticeable difference in his communication skills,” said Santana. “Luis has even started a job at Holland of assisting his instructor with collecting data on a daily log for each classroom.” 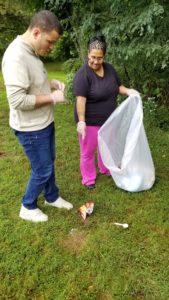 In addition to assisting Chatelier with the daily classroom logs, Luis has also been instrumental in keeping the classroom tidy and watering the plants, two skills that helped him to secure a volunteer position outside of Woods.

“Due to his behavior stability, Luis also started a volunteer opportunity cleaning up at Silver Lake Nature Center in Bristol,” said Santana. “He has done extremely well and actively participates. This is a major accomplishment for Luis and we are all so proud of what he has accomplished!”

Though it may no longer be just the two of them, Luis and Musa remain close and are enjoying their bond more than ever before.

“Working with him has helped me see life from a different perspective: with persistence, anything is possible,” said Musa. “Today, Luis is like family to me and I enjoy every second with him.”

Luis’ accomplishments and abilities also extend to his residence at Woods, where, with the support and encouragement of his staff, Luis is now able to assist throughout his home on various tasks such as: delivering the mail to the residential supervisors, assisting staff while bringing his laundry to his bedroom, and sweeping the kitchen floor in the dining room after dinner.

Luis’ care team at Woods has certainly enjoyed seeing their hard work and investment in Luis come to fruition. But other important people in his life like his family members and friends are also enjoying a “whole new Luis”.

“He went through a period when he refused to do anything for himself and relied so heavily on staff for everything. He would not even walk standing straight up,” said Lynch. “But now, he is starting to dress himself, participate in tooth brushing by doing the movements himself and showing more interest in his daily activities. He has built some great bonds with his staff over the years.”

“The most significant growth that has been seen in Luis over the past few years would have to be his overall demeanor and sense of calm. Luis always has a smile on his face and loves to interact with his family, staff, and peers,” said Caraballo. “Luis is an amazing young man and we all feel very blessed to be able to play a small part in helping him grow and achieve his goals.”

In an effort to improve communication, daily living skills and educational outcomes for both … END_OF_DOCUMENT_TOKEN_TO_BE_REPLACED

We are committed to eliminating barriers and creating possibilities for achievement.   We … END_OF_DOCUMENT_TOKEN_TO_BE_REPLACED

We exist to drive greater achievement for the individuals we serve.  Whether living  on our campus, … END_OF_DOCUMENT_TOKEN_TO_BE_REPLACED