It must be recognized that not all individuals are capable of participating in an interview, and some small number of individuals may be unwilling to participate.  Participation is not forced, and responses are never entered via third party estimates of how the individual would respond.  Only voluntary independent responses are recorded.   Collected in this manner, responses to at least some of the questions were obtained from 213 consumers.

A word of caution must precede any presentation of “satisfaction” data.   It has been argued in the business literature, for example, that measures of consumer satisfaction are actually assessing dimensions of personality rather than actual satisfaction.  That is, there are people who are generally satisfied with most things and people who are generally dissatisfied with most things, and these “satisfaction” measures seem to be able to distinguish between these groups.   It is not clear that the dimension presumably being assessed (i.e., satisfaction) is as important as the personality of the person giving the opinion.  The validity of such data is highly open to question, with the strong suggestion that satisfaction is perhaps better viewed as a measure of personality rather than a measure of an individual’s assessment of quality.   Thus, these findings, even though they appear to be largely favorable towards supports and services offered by Woods, like any satisfaction rating, must be viewed with at least a certain degree of skepticism.

Satisfaction with one’s current day program was asked in the same manner in 2018, 2019, and 2021 surveys (note that 2020 was skipped due to the pandemic).  While this does not permit a true longitudinal assessment of day program satisfaction, it provides three comparable comparison figures.  These satisfaction indices are presented (combined for Mollie Woods and Woodlands programs)  in the figure below: 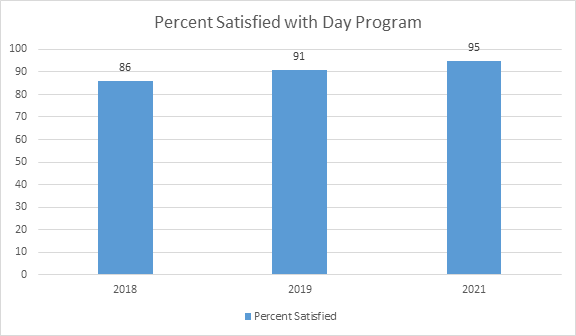 Despite these consistently high levels of reported “satisfaction,” it is noteworthy that a relatively large percentage of individuals reported that they would like to have another day program.    Over the three years being considered, the percentage of individuals expressing this interest declined from 41% to 23% to 16%.   It is possible that these fluctuations are at least a function of the sample of individuals who responded.   When respondents indicated that they would like a different type of day program, they were asked to identify the desired program.   Data from 2021 yielded the following alternatives:

Respondent were asked whether they liked their residence at Woods.  Once again, historical data permitted us to make cross-sectional comparisons of residential satisfaction in 2018, 2019, and 2021.  These data are presented in the figure below.  Once again, these data are aggregated from Mollie Woods Program and from Woodlands Program. 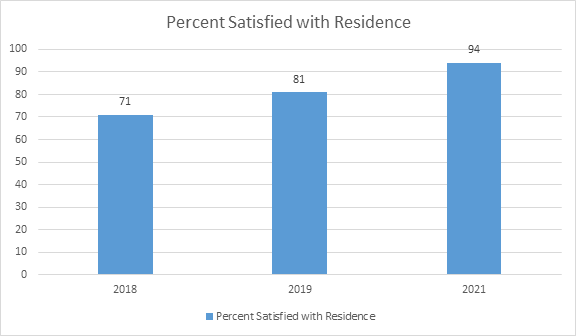 Getting along with housemates would seem to be a critical issue in a congregate care setting, and in Woods’ case, the matter is perhaps further complicated by Woodlands’ admission policy of requiring substantial behavioral challenges.   Despite this fact, respondents consistently reported that they liked their housemates.   Once again, we can view cross-sectional data from 2018, 2019, and 2021. 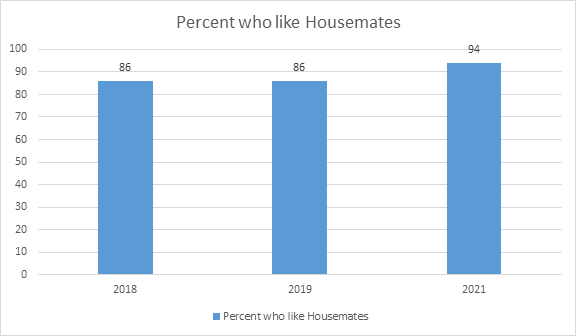 In general, it appears that most people are generally satisfied with their day program and residential situation at Woods, although it has to be recognized that almost everyone would prefer to live with their family.   Living with one’s family was the primary alternative suggested to living at Woods, and the number of individuals making that suggestion is perhaps suppressed slightly by the number of older adults  for whom that is not an option.     The second most frequently cited alternative is group home, and Woods’s efforts to increase its representation in the community seems justified by these data.

In an effort to improve communication, daily living skills and educational outcomes for both … END_OF_DOCUMENT_TOKEN_TO_BE_REPLACED

We are committed to eliminating barriers and creating possibilities for achievement.   We … END_OF_DOCUMENT_TOKEN_TO_BE_REPLACED

We exist to drive greater achievement for the individuals we serve.  Whether living  on our campus, … END_OF_DOCUMENT_TOKEN_TO_BE_REPLACED