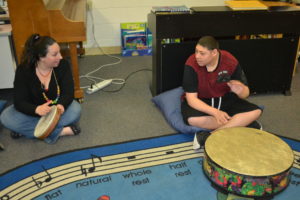 Angela Jowett has been a teacher at Woods for 13 years. Nothing warms her heart more than the sound of music bellowing through the halls at the Gardner Education Center.

Whether it is the voices of her students, the sounds of instruments, or the favorite music of one of her classes, Angela enjoys it all. Jowett says one of the highlights of her job is getting to see firsthand the impact that music has on individuals with intellectual and developmental disabilities.

“Many of my students cannot communicate in traditional forms like speaking, writing, facial expressions, but they do react to and respond and participate with music,” she said. “The students learn a wide range of things in music class, from turn taking, to working together, to seeing how their individual part works within the whole.” 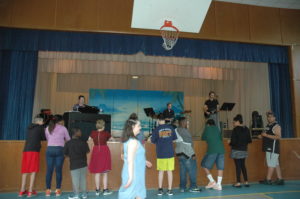 Woods has experienced a recent expansion in its Music Appreciation and Therapy Program, which is funded exclusively through private donations, thanks to a $50,000 gift from the W. Duke Kimbrell Family Foundation and a $7,500 grant from the Church and Dwight Employee Giving Fund.

Both grants have been used for a variety of activities, including group therapy sessions, chorus groups, and sing-a-longs. In addition, the funds allow Woods students and residents to attend recitals by professional musicians from The Conservatory, a nonprofit organization in Doylestown, PA that provides music therapy, appreciation, and instruction.

While music provides recreation and enjoyment on a daily basis, it had a profound effect on Calvin, a former Woods student. Though he was conversational at one point in his life, he lost most of his language skills and the ability to communicate verbally. But, when it came to music, Calvin could still sing. “He would sing ‘The Lion King’, ‘Take Me Out to the Ballgame’, and ‘How Much is That Doggie in the Window’? He was able to access words when he sang and he would be ‘unstuck’ for a few minutes,” recounted  Jowett. “I was able to meet Calvin’s mother at one of the Woods galas and when I told her about the singing it moved her to tears.” 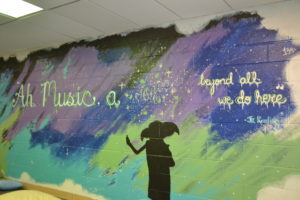 Jowett has seen the music program at Woods expand immeasurably since she first started teaching here more than a decade ago. She has plans to keep the momentum going and introduce even more instruments, technology, and opportunity into the curriculum.

“Seeing my students grow is what keeps me here at Woods. I’ve been the music teacher for almost 13 years and that’s a long time to be in the exact same job!” said Jowett. “If I was reaching for the sky, I would like a piano so that our students could see the inner workings of the instrument, feel it better, and function with it in my class. Pipe dreams, right?”

In an effort to improve communication, daily living skills and educational outcomes for both … END_OF_DOCUMENT_TOKEN_TO_BE_REPLACED

We are committed to eliminating barriers and creating possibilities for achievement.   We … END_OF_DOCUMENT_TOKEN_TO_BE_REPLACED

We exist to drive greater achievement for the individuals we serve.  Whether living  on our campus, … END_OF_DOCUMENT_TOKEN_TO_BE_REPLACED