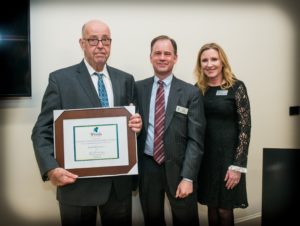 It’s a long trip from Quincy, Florida to Langhorne, Pennsylvania, especially if you don’t like the cold weather in January, but friends and family of Mortimer Bates traveled from three states to attend the annual Woods Fete and Fundraiser on January 20 to see Mortimer Bates receive a well-deserved honor: the Jane Cowles Stewardship Award, the highest honor offered by Woods Services each year to one of its most loyal donors.

Mortimer came to Woods in 1948 at age nine. After attending school at Woods for nearly 10 years, “Mort” moved to Florida to be closer to his family. While at Woods, Mortimer developed an interest in Photography, which he studied after completing high school in Florida. He went on to become a wedding photographer, retiring in 2003.

In a video interview aired Saturday night at Woods Fete and Fundraiser, Mort remarked on the strong impact that Woods had on him, both in terms of developing his interest in photography and the life-long relationships he made, “As an adult, I realized how much Woods helped me.” One of Mort’s closest friends from Woods was on hand Saturday night for the Award Ceremony. 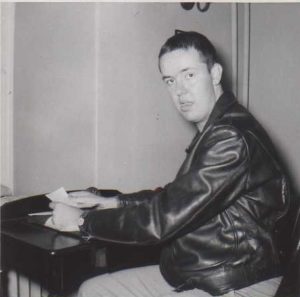 Mort’s loyalty to Woods has been sustained through annual gifts from his family foundation. His generosity has helped many individuals at Woods achieve their highest potential, reach their goals and lead fulfilling lives.

Last Saturday night, January 20, more than 275 guests attended Woods Annual Fete and Fundraiser in Langhorne, Pennsylvania. More than $318,000 was raised at the event to renovate and expand the Davenport Medical Center at Woods.

Woods has expanded and reorganized its new Medical Center to 1) add new primary care providers, additional exam rooms, a new lab and radiology services; 2) expand employee health services to provide acute and preventive care; and 3) expand training and educational opportunities for medical, nursing and related services to build a cadre of providers in Pennsylvania who can better serve its vulnerable population of persons with intellectual and developmental disabilities.

In an effort to improve communication, daily living skills and educational outcomes for both … END_OF_DOCUMENT_TOKEN_TO_BE_REPLACED

We are committed to eliminating barriers and creating possibilities for achievement.   We … END_OF_DOCUMENT_TOKEN_TO_BE_REPLACED

We exist to drive greater achievement for the individuals we serve.  Whether living  on our campus, … END_OF_DOCUMENT_TOKEN_TO_BE_REPLACED