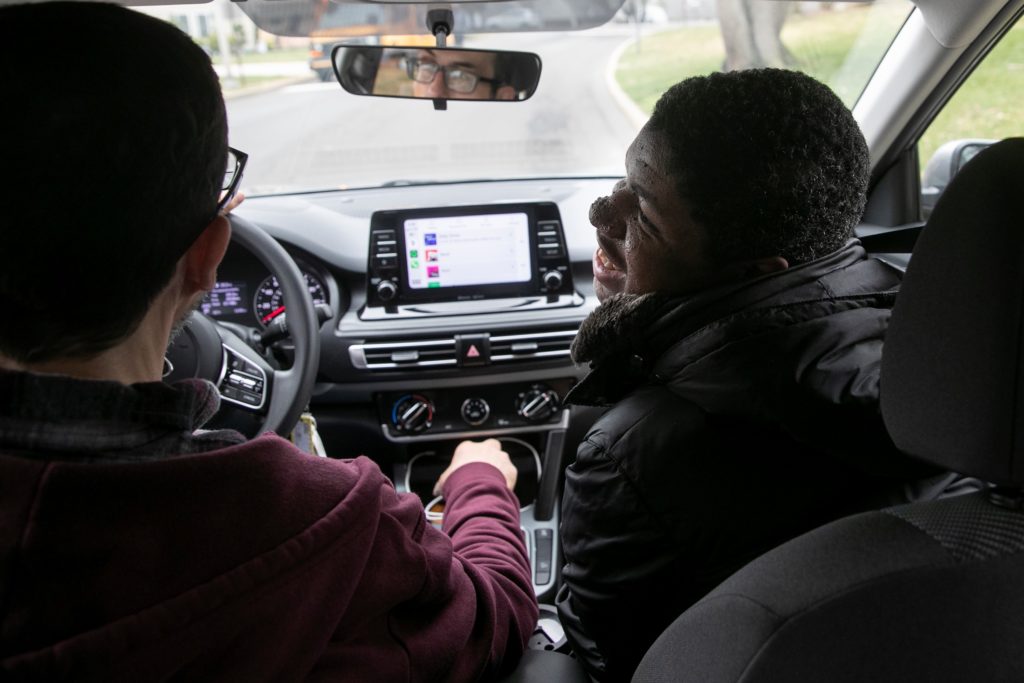 For a long time, Bob Reiss had been losing sleep over Benjamin Tucker’s future.

Bob, 47, is a direct-support professional and staff mentor at Woods Services in Bucks County, a provider of residential and other services to 650 people who have developmental or other disabilities. Tucker, who just turned 21, is mildly autistic and has multiple sensory issues. He cannot bear the feel of some foods on his hands (he uses utensils to eat french fries, for example) and struggles with tasks like brushing his teeth and adjusting a face mask. He also has both a benign tumor disorder and a rare cancer, both of which are treated as chronic conditions. His health is stable, said Bob, who is Tucker’s primary caregiver. Overall he’s doing well.

Not that Tucker would tell anyone otherwise. The smiley young man (who was too shy to comment for this story) is incapable of complaining. So it’s up to his caregivers to detect when his affect seems different, for example, or his gait is off. His team at Woods is big enough that it doesn’t take long before someone notices that Tucker is not himself, and they intervene.

What had been stressing Bob is that Tucker will soon need to leave his Woods residency, which is paid for via a federal education-entitlement program that ends when recipients turn 21. For a range of funding reasons, Tucker was not eligible for permanent residence at Woods, where he had lived since he was 16. So Woods had been working to place him in a small group home. Bob worried how Tucker would fare among new caregivers unfamiliar with his communication quirks and complex medical needs.

Benjamin Tucker, 21, turns while watching television in his new room at the home of Bob Reiss in Northeast Philadelphia on Thursday, March 25, 2021. Reiss works at Woods Services, a large residential center for people with intellectual disabilities. For five years, he has been among the team of people who provided care for Tucker, who has chronic medical conditions and autism. Reiss has decided to take in Tucker, through a program called LifeShare, where the two men will live together and essentially be family. It’s a program that is slowly picking up steam in the world of developmental-disability care.

As the clock ticked toward Benjamin’s birthday, and a suitable home had not yet been identified, everyone was growing concerned. But Bob was in a panic.

For five years, he has been Benjamin’s point person, accompanying him to appointments, holiday events, outings, and trips sponsored by St. Christopher’s Hospital For Children, where he receives treatment. Staff from Woods and St. Chris are like kin to Benjamin, whose own family is unable to care for him (though he is in close touch with his sister and mother, who gave permission for Benjamin’s story to be told but did not want to comment for it). After all this time together, Bob has developed a deep love for Benjamin, he said.

“You form a bond when you’re with people during key moments of their lives,” said Bob. “We don’t replace a person’s family — there’s always that boundary; we’re here to support people to make their life meaningful. But it’s impossible to keep your distance.”

Bob is single, childless, and comfortable in the world of disability. When he was growing up, his mother, who retired from Woods after 40 years in direct-support care, often brought Woods’ clients home for a meal with her family. Two decades ago, Bob followed in his mother’s footsteps.

He loves everything about Woods, whose sprawling 300-acre campus includes residences for 500 people, three schools, and a center for day programs.

“I’m honored by the trust families put in us,” he said. “Some people dread going into work. Every day for me feels like a privilege.”

Late last year, Bob heard about a program called life-sharing, in which people with disabilities choose to live in the community with a host or family that has been licensed and vetted by the state. In blending the routine experiences of their everyday lives, participants form a caring household — a place to be seen, heard, known, and loved.

In Pennsylvania, approximately 1,600 people with disabilities live in such arrangements, according to the Department of Human Services, which launched the service in 1982.

In 2018, Brian’s House, a Woods affiliate, began offering the co-living option to its 140 clients with disabilities. Four have chosen life-sharing homes and are flourishing, said Brian’s House CEO Lori Plunkett.

“Certain people really benefit from life-sharing,” she said. “In some cases, it springs from an existing close relationship, but we also do community outreach to find potential hosts. Matching people is an art.”

When Bob learned that Brian’s House offered life-sharing, “it was like that funny lightbulb popped over my head,” he said excitedly. Entering such an arrangement with Benjamin, he realized, would simply formalize the caring relationship they both already treasured. The men decided to give it a try.

First, Bob had to be vetted and cleared by the state as an approved service provider. He moved from a one-bedroom apartment to a two-bedroom one, also inspected by the state, so Benjamin would have his own space. And then Benjamin began visiting for meals, evening visits, and weekend stays to test the waters of co-living.

It has gone better than they could’ve hoped.

Benjamin is thrilled with his new room, where Bert and Ernie plush toys grace his captain’s bed and he has his own TV, allowing him to watch repeats of his favorite movies — like the Spider-Man Trilogy and The Sandman — and YouTube videos of ’70s soul groups like The Whispers and The Commodores. He has hung out with Bob’s family and already seems to love Bob’s seven nieces and nephews, one of whom also has special needs and another whose name is also Benjamin. Bob’s mother, sister, and brother live close by and are participating in Benjamin’s care.

As for Bob, he is responsible for rent, utilities, maintenance, food, household items, vehicle and labor costs, insurance and home maintenance. And he will take Benjamin to all of his medical appointments and help him engage in community activity. He will be required to meet with a monthly monitor and complete paperwork (medical appointment documentation, fire drill reports, medication).

In exchange, he will receive a small stipend ($75/day) as a caregiver/provider and up to 30 days of respite services in a year.

But what is priceless, he said, is the relief and happiness he’s feeling these days.

“I am at peace for the first time in a few years — this just feels right,” Bob said. “Benjamin is with me and my family now. I can’t believe we’ll have the opportunity to see what kind of man he’ll grow into.”

In an effort to improve communication, daily living skills and educational outcomes for both … END_OF_DOCUMENT_TOKEN_TO_BE_REPLACED

We are committed to eliminating barriers and creating possibilities for achievement.   We … END_OF_DOCUMENT_TOKEN_TO_BE_REPLACED

We exist to drive greater achievement for the individuals we serve.  Whether living  on our campus, … END_OF_DOCUMENT_TOKEN_TO_BE_REPLACED